Military buildings in the area were sold off, and some were purchased locally. The Signal Station at Castleton was considered for a local cottage hospital, but eventually was converted to sheds in Avoch. A hutment from Cromarty was sent to Killen, ad a urinal from the camp was sited at the burn near Henrietta. An army hut was erected in Avoch for ex-servicemen. In Fortrose, the town council donated a site for the “comrades hut”. 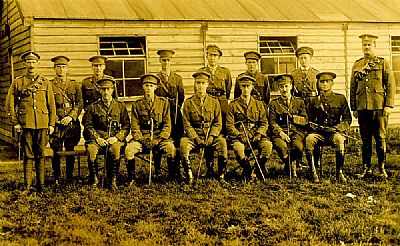 It is not known where the photograph to the left from the Groam House collection was taken, or who the soldiers pictured here were. The hutment in the background is the kind which would have been sold off after the war.

War trophies were offered to Fortrose, including a German gun. There was clearly no interest in havng it on display. First, it was refused a place in the Cathedral enclosure. By 1921 the gun was lying on the beach below the Fortrose Episcopal Church, with a proposal to move it to the harbour. It is not known what happened to it.