Drypoint is a technique for printmaking in which lines are scored on a flat plate using a sharp, pointed tool. The depth and width of the lines is determined by the pressure applied to the tool and the angle at which it is held relative to the plate.
The plate is traditionally made of copper but other materials can be used.

The most important characteristic of drypoint is the ‘burr’ created when a line is scored on the plate.  The burr is formed by plate material thrown up alongside the line, like a bank alongside a ditch, and its size depends on the angle of the tool and the pressure applied. A lightly and vertically scored line has little or no burr.  A heavily scored line created with the tool held at an acute angle creates the biggest burr.
When ink is applied to the plate it is held by the burr before being transferred to the paper on which the print is to be created.  The bigger the burr the more ink is held.
Thus the artist can exercise considerable control of the size and strength of the lines in the finished print.

The use of the burr distinguishes drypoint from engraving where the burrs are removed from the plate.  Pressing paper onto the drypoint plate to make prints quickly wears down the burrs, so not many prints can be made from one plate. That limitation does not apply to engraving but removal of the burrs results in hard edged lines in the finished print.  With drypoint lines can appear more blurred because of the ink held by the burrs, resulting in more subtle lines and effects.

Drypoint seems to have originated in Germany during the 15th century and before George Bain some famous artists used it, including Albrecht Durer and notably Rembrandt.  In the 20th century many other artists produced drypoints, including Max Beckmann, Milton Avery and Hermann-Paul.

The earliest technique for printmaking was to carve a 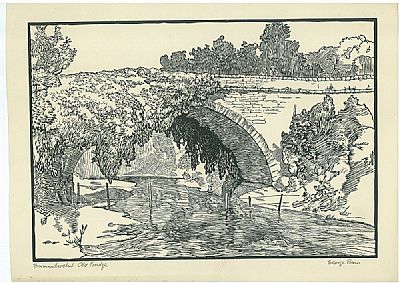 ‘negative’ image of the desired print into a wooden block – known as the ‘woodcut’ technique. Ink was then applied to the block surface and the uncarved areas would transfer a positive image of the print onto the paper which was pressed onto the block.

Linoleum was invented as a floorcovering in the 1860s but early in the 20th century (1905-13) its potential as a printmaking medium was recognised by artists in Germany who were making wallpaper.  Linoleum for printmaking is often mounted onto a wooden block for carving.

Compared to wood linoleum has no grain and this makes it an easier medium to work with in order to achieve various artistic effects.  On the other hand linocut prints inevitably lack the attractive graininess exhibited by typical woodcut prints.  Because of its ease of use and relative cheapness linocut has often been used to introduce children to the printing process.

Several famous artists have used the technique including Matisse, Picasso and M C Escher.
We know from a document in our collection that George Bain was experimenting with linocut as early as 1907 which puts him literally at the cutting edge of the use of this medium.  Indeed there is a reference to his invention of a modified technique which he called ‘Lino-Engraving’. 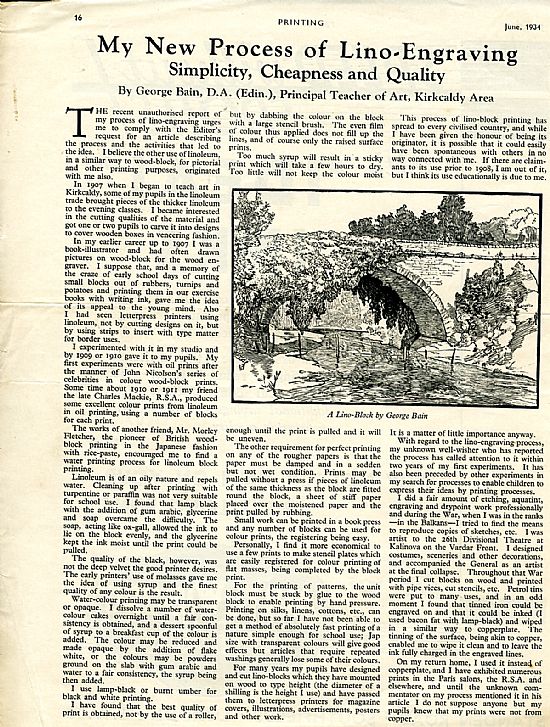