WORKS OF GEORGE BAIN EXHIBITED DURING HIS LIFETIME

We know from “George Bain, Master of Celtic Art” by Susan Seright that George Bain exhibited at the Royal Scottish Academy over many years starting when he was aged 19 in 1900.  Over the years he exhibited many works some of which can be seen on display today in the exhibition "George Bain : Beyond the Celtic Knot".

We referred to “The Royal Scottish Academy exhibitors 1826 – 1990, a dictionary of artists and their work in the annual exhibitions of the Royal Scottish Academy” compiled by Charles Baile de Laperriers.  There we found a comprehensive list of all the works George Bain exhibited in chronological order and were interested to learn he was described as an “engraver”.  We were then able to search our Collection to attempt to locate the items he exhibited at the RSA.  Several of the works he exhibited do not form part of our Collection and we have been unable to find their location, perhaps they lie in private collections somewhere?  Not being able to see them or even images of them has left us feeling intrigued.  It is hoped that further research can be carried out to locate the works and learn more about them.

A particular favourite is “An Arab Turk, 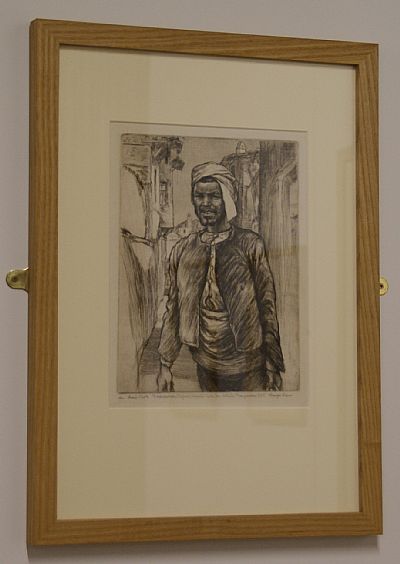 Macedonia”, a drypoint etching and believed to have been created after Bain returned to Scotland, from sketches he made while serving in the Balkans (1915 – 1919).  It appeals because the expression on the subject's face implies a little self-consciousness, a nervous smile while at the same time appearing relaxed, a lovely composition.  Bain exhibited this in Paris at the Salon des Artistes Francaises (SdAF) in 1925.

Bain’s empathy with his models is evident in his sketch “A Roumanian” which he exhibited at the Royal Scottish Academy (RSA) in 1929.  The nobility he sees in the face of the subject is demonstrated in his delicate portrayal of the man.

He had a mischievous sense of humour which is shown in “Macedonian Revelry”.  Take a close look at each of the characters and you can see the fun and enjoyment in their expressions, it is almost as though Bain himself had been joining in and had just sat down to take a rest, capturing the revellers in their capers whilst the musicians were appearing quite serious, almost disapproving of the behaviour of the others.

Whilst searching for works exhibited at the RSA, we discovered that he also exhibited over several years at the Paris Salon.  This was manifested initially from copies of the publication "La Revue Moderne" which showcased the work of artists in specific years.  Having got this far we then found a collection of invitations and exhibitors tickets which helped us establish precisely when he exhibited.

One object that particularly intrigues is a statuette titled “The Dawn of Intellect”, an amusing figure fashioned from plaster and painted with bronze paint – perhaps finances would not permit the figure to be cast in bronze?  The figure appears to be smiling to itself, maybe knowing something we do not?  There is also a large oil painting of the Acropolis which appears to have been cropped to fit into a frame.  We can see from the pictures in La Revue Moderne the painting was not cropped when it was exhibited.  Why was the painting cropped to fit into a frame that is a little crude?  Another mystery!

We have been unable to find a comprehensive list of works he exhibited in Paris.  Many of the drawings in our Collection have handwritten notes with notes suggesting Paris including dates identifying them as exhibits.   He was not averse to making copies of the exhibits, presumably to sell, he did not earn a huge salary while teaching at Kirkcaldy.  One edition of "La Review Moderne" in our collection dated August 1922 provides comprehensive information of his exhibits for that year but the information is by no means complete.   Handwritten notes on “The Arab Turk” state it was exhibited in Paris in 1925.  We can see from his exhibitor’s tickets he also exhibited every year from 1958 to 1961 but have been unable to establish what he exhibited in those years or indeed any other years not currently listed.  Clearly there is more research needed which may prove quite challenging.

It is clear that Bain was not just a Master of Celtic Art having unravelled the methods used in the construction of complex patterns which has led to artists all over the world to become inspired by him; a former pupil of his – the renowned architect Ian Begg, incorporates Celtic designs into his buildings, even in far flung parts of China.   He was also an artist in many forms using a variety of mediums and was able to use his skills commercially such as creating designs for carpets, knitwear and embroidery.  We know from the Collection housed at Groam House Museum, for which we hold National Recognition from Museums Galleries Scotland, he worked all his life producing prodigious quantities of art in so many forms, much of it quite exquisite.  Sadly, some objects are so fragile we are unable to display them until appropriate conservation has taken place on them.