Mosaic made by : Resolis Primary School 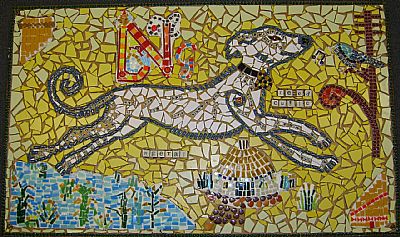 Reed although not a tree, is included in their tree alphabet as the Celts viewed any large plant with woody stalk as belonging to the tree family.

In Celtic times the landscape would have been quite different:  swamp areas would have formed habitat for reeds growing up to 20 feet tall! Today, much smaller reeds a can be seen growing all over the Black Isle in damp areas of fields and near water.

Reeds were very useful to the Celts and thus
were very important. They gained a symbolic
association with protection being used as roofing material, floor covering and candles. Whistles, flutes and pens were also made from reeds.

The symbolic animal associated with Reed in folklore is The White Hound as can be seen on Resolis Primary School’s mosaic.