The vine is a theme repeated over and over in Celtic design and it has been interpreted as various plants including Honeysuckle.  Groam House Museum Volunteers, however, chose to depict the vine as Bramble. Although today we would not recognise Bramble as a tree, the druids classified anything with a woody stalk in the tree family hence its appearance in the alphabet.

Vines are used to indicate connectedness, eternity and diversity, and to symbolise the intertwining of the conscious and unconscious mind. It has associations with enjoyment of the finer things in life, food, wine, music and art, hence the full wine glass!

The vine is strongly associated with the Faerie folk, as it was thought to be fairy food and that bramble thickets guarded fairy mounds. As well as fairies, blackberries provide winter food for a variety of small birds and mammals and the mosaic shows mice and a blue tit. 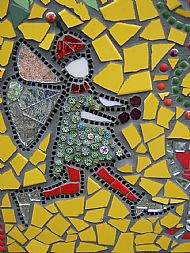 Detail of the fairy.