Mosaic made by : Resolis Friendship Group 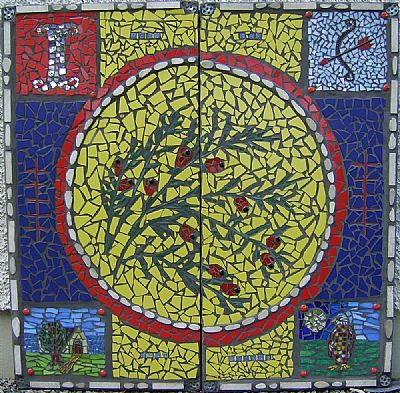 Yew is one of the longest lived of all British native trees with the oldest known specimen being over 3000 years old.  The yew is still found in many church and graveyards as many of these sites were once sacred sites used by the druids.

In Celtic times Yew symbolized life, death and
rebirth, and it is sometimes known as the death tree, presumably because of its highly poisonous nature.  Its distinctive multi-stemmed shape and dark green glossy needles often cause branches to droop to the floor where they will root and grow to form new trunks.

Shields and weapons fashioned from Yew wood were admired by the Celts and considered auspicious on the battlefield.  A bow and arrow are shown in the top left corner of the mosaic.  Divination rods are also traditionally made from Yew.