Mosaic made by : Avoch Primary School 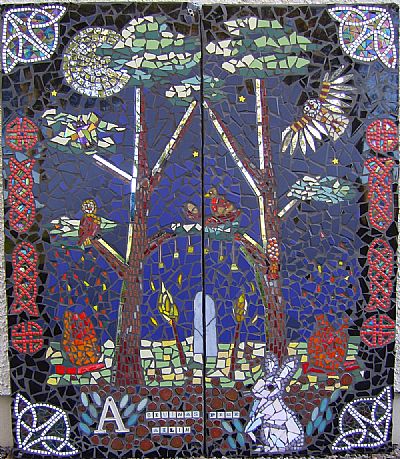 The Scots Pine is an iconic tree of Scotland and the Caledonian Pine forest in the Highlands is the only remaining true pine forest in Britain.

Scots pine trees usually live for around 200 years but the oldest recorded specimen was 700 years old. Its thick tough bark with flakey coppery orange near the top of the trunk make it easy to recognise. Finches love the seeds of the Scots pine and are often to be found in pine forests.  Owls nest in these trees so Avoch Primary School have included owls on their mosaic.

The Celts used the resin produced by Scots pine trees to make torches and it was known as the fire tree. The trees were also used to create huge bonfires at the winter solstice to celebrate the passing of the seasons when glades of pine would be decorated with lights and shiny objects as can be seen on the trees in this mosaic.

The Celts also used pine trees to mark important burial sites of warriors, chiefs and heroes, linking the trees with reverence and remembrance.