Rosemarkie's Pictish stones were part of the monastic settlement that was created at Rosemarkie in the 700s AD. They are a fantastic group of sculptured stones from the stone chapel that was built here, at the site of the present church. Parts of the stone altar, sculpted grave covers and even a box shrine, amongst other carved slabs, can be seen. And there is the remarkably tall, slim cross-slab that once stood outside the church.

A few small fragments of Pictish sculptured stones have been found in Rosemarkie over the last 30 years. They are occasionally exhibited but are generally cared for in the museum store. If you are interested in seeing these stones just contact us at curator@groamhouse.org.uk 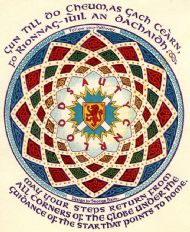 George Bain (1881-1968) was an artist, craftsperson, and educator. He made it his mission to understand how the early medieval art of Scotland, Ireland and Anglo-Saxon England was created. He taught others to create new designs using the same techniques. His book Celtic Art: The Methods of Construction gives step-by-step instructions on drawing Celtic patterns found on Pictish stones, in the Book of Kells, and in the Lindisfarne Gospels. As well as instructing others, Bain himself produced hundreds of Celtic designs, for everything from carpets to teapots, and from knitting patterns to handbags.

Bain was a prolific artist, interested in many different subjects and media. Sketches, etchings and paintings of the people and places that he saw on his travels in the Balkans and Scotland made up a large proportion of his output. Since 1997 the Bain family has gifted his Celtic art, paintings and artefacts to this museum.  In 2014 the national significance of his archive was celebrated by the award of Recognised Collection by Museums Galleries Scotland.

We usually exhibit an aspect of George Bain's work each summer. His collection is available for research all year by appointment via curator@groamhouse.org.uk.

The local history collection relates to the lives of people in the Avoch, Fortrose and Rosemarkie part of the Black Isle. There is an absorbing photographic archive, as well as objects given by members of local communities and artefacts from archaeological fieldwork.

We usually display a theme from this collection at some time during the year. In the past we have explored the history of Rosehaugh House, Dr William Maclean's interest in the caves near Rosemarkie and, most recently, finds from archaeological fieldwalking and metal-detecting in the Fortrose and Rosemarkie area.

The photographic archive can be viewed at the museum or via old photographs of Rosemarkie, Fortrose and surrounding areas. Other items can be studied by contacting us at curator@groamhouse.org.uk.